My cousin Vinnie, the suburban real estate attorney, joined us for a Pat’s game in the Man Cave and it happened to be on a day that I was 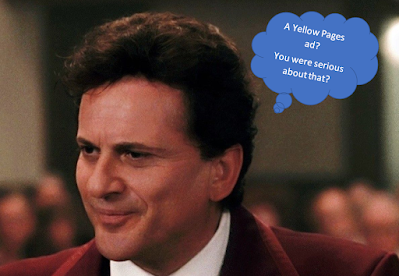 serving smoked pulled pork. We were watching the smoker intently with our eyes glued to about 5 different thermometers. Vinnie was not interested in the effects of heat on meat collagen, so he brought up the subject of the management of his tiny suburban law firm.

“Paulie, I let one of those web consultants talk me into updating my web presence. He shamed me into it by pointing out the obvious: that my website looks like it was created on an Apple II, and our website can’t be viewed on mobile devices. I tried to tell him that I was perfectly happy with the trickle of business that I have enjoyed over the decades via word of mouth, but he scared me into thinking that nobody under the age of 40 would ever find me if I didn’t do something. So I am now paying dearly for a fancy website and favored-nation status on search engines.”

I was afraid to ask him if his business had increased, but I asked him anyway. He immediately responded with a loud “NO!”

“I now waste more of my time taking calls from all sorts of interesting people from all around the Commonwealth that found me on the internet; but I’ve been unable to help a single one of them. I get calls from people who are 15 months into representing themselves pro-se in court cases involving stop work orders from building inspectors, or people that have spent months arguing with every department in the City of Boston or the City of Springfield, and are convinced that there are conspiracies working against them. There is nothing on my web site that suggests that I hang around court houses or that I know where Springfield is, but they call me anyway.”

I added more wood chips to the smoker and said: “Something tells me that it would not make any difference even if your website said that you are not a litigator and your local counsel practice is focused in particular towns.  You know it reminds me of the time, about 35 years ago, when we paid for a full-page color ad on the back of the local yellow pages. This when people stilled used the yellow pages; before the internet. I made the decision to publish a special phone number in the color ad so that we could track how many new clients we received via that phone number.”

“You’ve told me this story” said Vinnie, “And the answer was zero.” “You are correct” I replied. “There is something to be said for word-of-mouth referrals.”

A former REBA president, Paul Alphen currently serves on the association’s executive committee and co-chairs the long-range planning committee.  He is also a member of the Executive Committee of the Abstract Club. He is a partner in the Westford firm of Alphen & Santos, P.C. and concentrates in residential and commercial real estate development, land use regulation, administrative law, real estate transactional practice and title examination. .As entertaining as he finds the practice of law, Paul enjoys numerous hobbies, including messing around with his power boats and fulfilling his bucket list of visiting every Major League ballpark.  Paul can be contacted at palphen@alphensantos.com