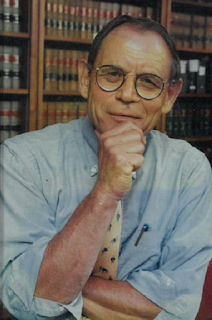 On June 4th, Massachusetts Appeals Court Justice Rudolph Kass passed away at the age of 90.  Rudy, as he was affectionately known,
had so many varied interests and involvements over his storied career that they are impossible to fully or adequately capture.  To state that he was an exceptional lawyer, jurist, mediator/arbitrator and human being is a gross understatement.  Rudy was the antithesis of the ordinary and that was readily apparent to all those who had the good fortune of counting him as an acquaintance, friend, colleague and/or mentor.  His trademark chuckle punctuated virtually any conversation and put people at ease, at the same time as he quoted often obscure passages from great literature.

Rudy was determined to, and did, excel at whatever he undertook.  Not only was Rudy successful in his legal career as a real estate lawyer, judge, Boston College Law School professor, and mediator/arbitrator, he was also impressive for living his values of hard work, decency, generosity and concern for others.  He was a real mensch in a very quiet and unobtrusive way.  By contrast, Rudy’s public persona, fueled in large part by his celebrated judicial opinions, was hardly inconspicuous.  No matter how successful he was, Rudy’s core and endearing humility never wavered.  He was a role model for countless lawyers and judges, even though the combination of his unique qualities and skills could not be duplicated.

After serving as managing editor of the Harvard Crimson student newspaper, as a stringer for Time news magazine and part time photographer for the Boston Record American newspaper during his time as a Harvard undergraduate, Rudy faced a difficult choice between pursuing a career in journalism or going to Harvard Law School.  By combining his impeccable writing skills with the practice of law at Brown Rudnick, and then for more than twenty years as a justice on the Appeals Court, Rudy was able to merge his twin professional loves of writing and the law in his memorable and well-crafted opinions.  He unleashed his natural creativity and writing ability in finely-honed phrases that provided entertainment in addition to otherwise clear and sound judicial opinions.

Those familiar with his work may debate their own favorites, but we offer a few examples here.  In Allen v. Batchelder, for example, he explained the concept of ouster – the doctrine by which one fractional owner of property may extinguish the interest of another – by telling the story from an unusual perspective, opening the opinion with the following unforgettable line:  "Sebastian, the tobacco-chewing sheep, would be disconcerted by this appeal."  He went on to explain that Sebastian's prominence on the Allen family farm in Chilmark was among the many factors supporting the notoriety of their occupation of the property.  A question that often-bedeviled buyers and sellers of property was how to determine the precise moment when parties became bound during their progression from an offer to purchase to full agreement.  In Goren v. Royal Investments, Rudy offered a simple and pragmatic, but also evocative, framework: "There is commercial utility" he observed "in allowing persons to hug before they marry."  In determining the contours of a noncompetition covenant in a commercial lease, the case of Kobayashi v. Orion Ventures required him to delve deeply into what constitutes a delicatessen, including a footnote recounting the classic comment by the proprietor of the Carnegie Deli in New York following a robbery: "Idiots – they took the money and left the pastrami!"  (Footnote 9 of the same opinion illustrates the circular logic of an argument by reference to dialogue from a Gilbert and Sullivan play).  He was surely one of the most visible members of the Appeals Court in its history, and remains one of those most often cited.

In addition to his impressive career achievements, Rudy enriched our broader communities in so many ways.  Among the many non-legal organizations he supported, he was a founding board member of 2Life Communities, Inc., formerly Jewish Community Housing for the Elderly, and served in that role until his death.  He was a trustee of Brigham and Women’s Hospital and served on its Ethics Committee until very recently.

But none of these involvements fully capture Rudy’s spirit.  Perhaps his legendary urban bike riding best exemplifies Rudy's adventurous and whimsical, but determined, nature.  For decades while living in Arlington and then Brookline, Rudy commuted to Boston by bicycle.  Inclement weather was never a deterrent, even when he would return home late at night in the pouring rain.  Despite his love for his extraordinary wife, Helen, Rudy rebuffed her repeated entreaties to forego the risk of his bicycle in favor of the T or other less hazardous forms of commute.  Rudy refused to take a taxi, or more recently an Uber or Lyft; he would remark that his generation didn’t take taxis.  Just a few years ago, when Rudy was bicycling from his home in Brookline to Brigham and Women’s Hospital for an Ethics Committee meeting, he did not see the 18-wheeler in front of him making a right-hand turn.  The trailer hit Rudy, who thankfully was catapulted onto the sidewalk with no broken bones – just wounded pride.  His bike was demolished by the rear wheels of the trailer.  However, neither that incident nor the many other close calls could deter him from resuming his bicycle riding.  When he was finally forced to give it up at age 86 or 87, he kept his bike in his apartment and often looked at it forlornly, as though trying to figure out how he could ride again.

No proper description of Rudy's life can neglect a further mention of Helen.  Theirs was an inspiring and continuing romance.  It was evident in even the most casual observation of the two of them together – and they were almost always together – how intertwined they were.  They demonstrated a comfortable and gentle intimacy, based on mutual respect, that was a model of an ideal marriage.

Of the attributes that best describe Rudy, three come to mind: optimism, curiosity, and adventurousness.  Combined, the three capture his openness – to new ideas, to new ways of doing things, and to new friends.  We are all beneficiaries of his generosity of spirit, his friendship, and his example as a role model.  He is an iconic figure in the Massachusetts judiciary, but his legacy extends beyond his work to the personal connection he made with each of us.

Rudy made a real difference in his life.  He was loved by so many of us and is already very much missed.

Deb Patterson, a close personal friend of Helen and Rudy Kass going back to 1977, joined the Land Court staff in 1979 and has served as its Recorder since 2003.

A retired partner from and former partner of Rudy Kass at Brown Rudnick LLP and former chair of its real estate department, Joel Reck currently serves as president of REBA’s affiliate, REBA Dispute Resolution and is an active member of the program’s panel of neutrals.