No Marshing-Around: Land Court Decision Traces Ownership of Mashpee Marshlands Back to the 1800’s.

The Land Court issued a decision in October (the “Decision”), after holding a bench trial to determine the ownership of the area between the mean high water mark (the line of the "upland") and 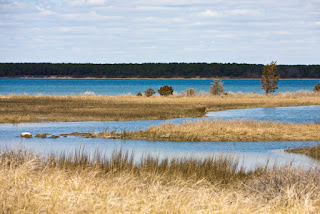 the mean low water mark (where the law deems the sea to begin) on a section of the perimeter of the Punkhorn Point peninsula, near Gooseberry Island, on the coast of Mashpee. The Plaintiffs in the case, Robert and Michelle Wolpe and James Atkins and John Weltman, own vacation homes at 80 Punkhorn Point Road (the “Atkins/Weltman Upland”) and 84 Punkhorn Point Road (the “Wolpe Upland”). Additionally, the Town of Mashpee claimed ownership of the marsh adjacent to upland owned by the Town (“Town Upland”). The Defendant, Matthew Haney as Trustee of SN Trust (“SN Trust”) claimed ownership of the marsh adjacent to the Wolpe Upland and the Atkins/Weltman Upland, and the marsh extending somewhat further south. See infra, Decision Sketch (additional notations added).

As Judge Long noted in the Decision: “precisely who owns the marsh, and where, is highly significant. For the Wolpes, Mr. Atkins, and Mr. Weltman, owning (or not owning) the marshland directly abutting their vacation houses is the difference between having waterfront homes with full access and rights to the waterside, and homes with no such rights. For [SN] Trust—which, in addition to its mainland claims, is the owner of Gooseberry Island just offshore— it is the difference between being able to build a house on that Island and not being able to do so, because only by owning the strip on the mainland at the end of Punkhorn Point Road will it have a place from which to construct a connecting bridge.”

The first task presented to the Court was determination of the record owner(s) of the marshlands in question. This required the Court and the parties to travel back in time to the late 1800s. A number of legislative acts in the late 1800s authorized the Barnstable Superior Court to appoint three Commissioners to make set-offs of certain land in Mashpee that was owned communally by the Mashpee (formerly known as Marshpee) Wompanoag Tribe. The set-offs by the Commissioners allowed individual members of the Tribe to own the parcels individually.
The first lands legislatively authorized to be set-off were uplands. A map of the uplands was created in 1877 by one of the Commissioners, Cyrus Cahoon, who was a surveyor (the “1877 Map”). Several years after the uplands were set-off, the legislature granted the same three Commissioners the authority to set-off marshlands. Both the upland and marshland set-offs were confirmed by orders of the Barnstable Superior Court. Thus, the Land Court’s analysis of the true record owner of the marshlands in question began with the set-offs in the late 1800s and the Court disregarded any subsequent deeds or plans that could not be traced back to the original set-offs as land grabs.

Unlike the 1877 Map of the uplands, a map of these marsh set-offs could not be located (although the Court found that such a map was likely created contemporaneously with the marsh set-offs). Thus, the second task presented to the Court was to determine where Old Division Lots 16, 17 and 18 are presently located on the ground. In order to do so, the Court analyzed the specific descriptions used by the Commissioners in the marsh set-offs, which he found were “carefully chosen references in light of (1) the commissioners' awareness of the Legislature's command that the set-offs be "properly describe[d] ... in writing," (2) their professional occupations (one a surveyor, another an attorney) that accustomed them to the need and practice of clear and precise language when drafting, and (3) their knowledge that the set­offs would be reviewed and ultimately approved by the Barnstable Superior Court, where clarity was essential.”

Having determined that SN Trust owned the marshes at issue, the final issue presented to the Court was determination of whether Plaintiffs established adverse possession or adverse possession by color of title to the marshlands. To succeed on an adverse possession by color of title claim, a claimant must prove the following: (1) the claimant's deed must facially include the land adversely claimed, (2) the deed must be recorded and have been on record for  twenty  years  or more  prior  to the filing of the lawsuit or other interruption of the claim (the "adverse possession  period"), (3) the claimant must have actually, openly, notoriously, exclusively, and adversely possessed at least a part of the land for that continuous, uninterrupted twenty years, and (4) if the claimant's own deed and acts of adverse  possession  are insufficient  to meet  the twenty­year period, he may "tack" onto the deeds and adverse acts of his predecessors in title during that period if (a) there was  no interruption  between  their  deeds and  adverse  acts and his, and (b) their deeds were also  recorded  and  included  the land.  See Dow v. Dow,  243 Mass. 587, 590 (1923); Nantucket, 271 Mass. 62, 68 (1930); Norton v. West, 8 Mass. App. Ct. 348, 351-352 (1979); Long v. Wickett, 50 Mass. App. Ct. 380, 382 n.3 (2000).

The adverse possession standard applicable to wild and uncultivated lands applied to Plaintiffs’ claims of adverse possession given the nature of the marshlands and a "pronounced" and continuous occupation was needed in order to prove their claims. Peck v. Bigelow, 34 Mass. App. Ct. 551, 556 (1993). Like all cases involving adverse possession, the Court’s analysis was fact specific: The land at issue “is salt marsh, covered in tall grass, deep mud, and completely under water at high tide. It is unsuitable for use as a beach (too silted and muddy) and, so far as the record shows, has never been used as a beach or for any recreational purpose other than fishing or crabbing. People do not walk on it idly or for pleasure. During the entirety of the view, which took place at mid-day, the area in front of the plaintiffs' homes was muddy, under water, and un-walkable. […] [A]ny activities on it, of any kind, were few and far between. It was not a place for use. Rather, it was something that was looked at, and which viewers looked over, as they watched sunrises, bird migrations, and boats in Popponesset Bay.”

Notably, the Court noted that there was testimony regarding children walking along the neighboring upland and occasionally going into the marsh to play, but those activities could not establish adverse possession as use by children, alone, cannot reasonably be seen as associated with a claim of ownership. “[N]o reasonable view of adverse possession considers young children, playing on their own, to be either adverse claimants or agents of such claimants whom a landowner is forced to chase away on peril of losing his land. The law is many things, but it does not require people to be mean to children. Children fall into the category of those to whom implied permission is deemed to have been given.” The children did not stay long in the marsh. They did not build anything there. They were interested in exploring for fish, marine life, and the like, all of which were within their public rights to do under the Colonial Ordinance. In other words, marsh-ing around by children who were playing by themselves cannot support a claim of adverse possession. 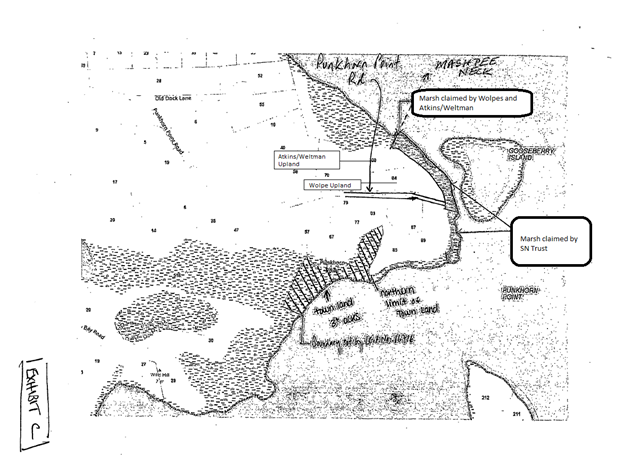