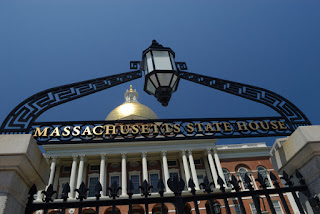 On April 25 the House of Representatives approved the FY2020 state budget recommendations of its Ways and Means Committee,
after a series of amendments that resulted in a total appropriations authorization of $42.7 billion for the fiscal year beginning July 1, 2019.

As is typical in this process, several finance-related changes in the General Laws were included.  Among them is an expansion of the conservation land tax credit, which was first authorized to take effect in 2011. According to the amendment’s lead sponsor, Representative Bradley Jones (R-North Reading), the tax credit on land donated to the commonwealth has helped protect 12,000 acres. The amendment would increase the present $2 million cap gradually by $1 million each year, starting in Jan. 1, 2020, to $5 million. There are said to be a number of applications pending throughout the commonwealth that would benefit from the amendment.

The House-passed budget bill (H. 3800, as amended) would increase the Registry of Deeds recording fee surcharge that supports the Community Preservation Act Trust Funds.  As conceived when the CPA was first passed in 2000, any community that approves a special property tax surcharge dedicated to CPA purposes was to receive matching funds from a Trust Fund that aggregates the Registry surcharges.  The amount of the registry surcharge has been $20 for most instruments since the CPA was passed in 2000.  Effective December 31, 2019, the pending legislation would increase that surcharge to $50 per instrument, except for MLC’s, which would increase from $10 to $25.  Also approved in the House recommendations for the FY2020 budget is an extension to 2025 for the funding of registries of deeds technology efforts from a dedicated $5 special recording fee surcharge.

The Senate will take up the budget bill in May.

Other finance-related bills of interest to conveyancers and their clients are still in committee.  Governor Baker has proposed S.10, to increase by 50% the amount of the deeds stamps to fund a Global Warming Solutions Trust Fund to assist communities in infrastructure resilience projects and risk mitigation.  Other bills would authorize local option adoption of special real property transfer taxes to fund the creation of affordable housing. (S.773, S.799, H.1769, H.2425, H.2552)

This REBA Blog posting was authored by Edward J. Smith. Ed Smith has served as legislative counsel to the Association since 1987.  He can be contacted by email at ejs@ejsmithrelaw.com.